Here you get to know anything about the advantages and the application of EC-Technology in Cleanrooms as well as other fields of Heating, Ventilation and Air Conditioning (HVAC). We will explain to you in detail the function and the meaning of EC-Fans and EC-Motors and their usage in modern industrial plants. To control and monitor these EC-fans permanently as well as for commissioning- and service tasks we provide our own modern Control devices out of our own production, all "Made in Germany".

Our Control Devices for EC-fans in the market

customers who apply or resale our control devices

uniqunet/uniquom - developed, designed and made in Germany

Your contact for topics service, development, programming and and control devices for EC-fans.

2012 Founder of vbk technology GmbH, Lecturer at the BSW (College of Engineering in Plauen and Chemnitz) and at the Sächsische Kältefachschule in Reichenbach

Especially in the HVAC applications this is immensely important, where the electronic drives being used very often in partial load operation exclusively.

Total energy savings up to 50% are not rarely compared to concepts with classical drives.

An EC-drives consists of an EC-Motors where permanent magnets create the required radial magnetic field inside the motor and an EC-controller a sort of frequency inverter that creates the current for the motor in a proper manner.

Especially EC-fans in the HVAC business are integrated that means that motor and controller belong to only one single unit.

The drive control of the EC-motor is done by the EC-controller automatically. The user just needs to ensure a set-point is supplied according his requirements.

This could be a simple analogue 0 ... 10V signal or a special BUS-signal created by a special control device as uniquom or uniqunet. Usually RS485-based systems are used as ebmBUS, Modbus or GBus.

EC-motors are according to its name electric commutated motors. The control of the stator winding system is done in accordance to the exact position of the permanent-magnet rotor. The position of the rotor is mainly measured by little hall sensors placed in the EC-motor in rotational sense or is calculated using a special mathematical model. In both variations an electronic drive control of the EC-Motor called EC-controllers is indispensable. 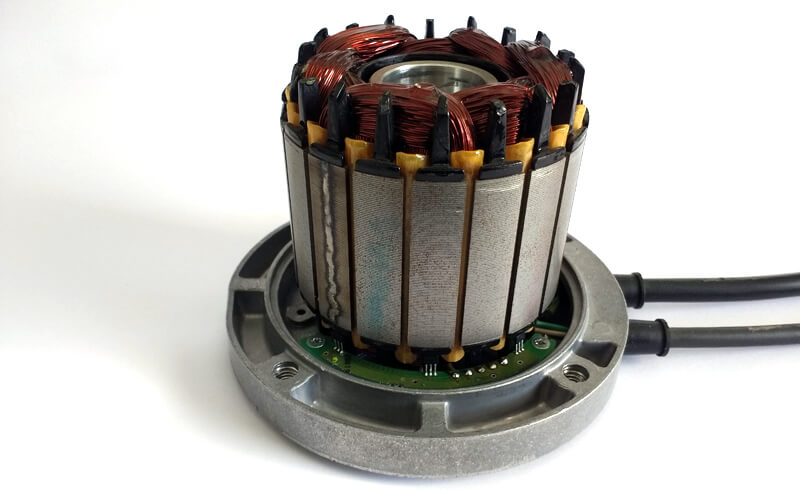 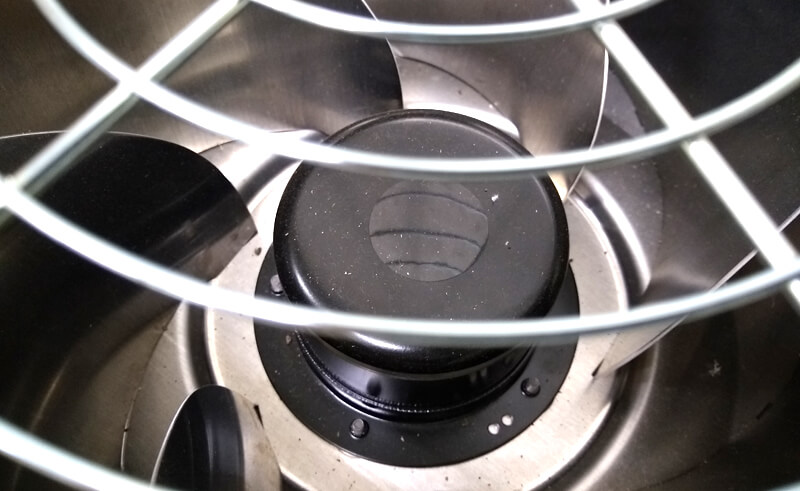 EC fans are applied in a wide range of HVAC units, especially in speed controlled systems, where high efficiency and noise reduction matters.

It can be for the control of FFUs or FANWALLs, it can be for Condensers and Evaporators or as classical Exhaust- and Supply Air fans. 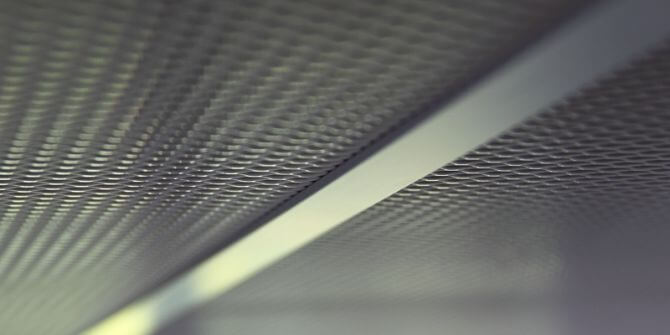 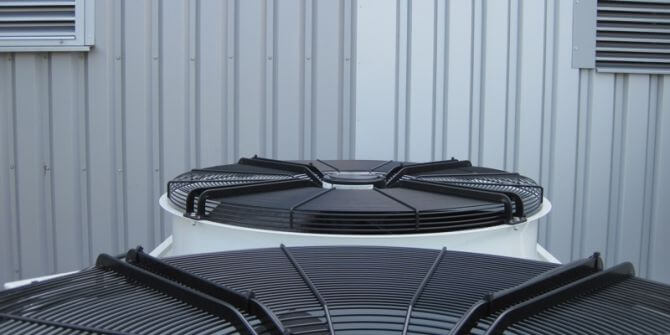 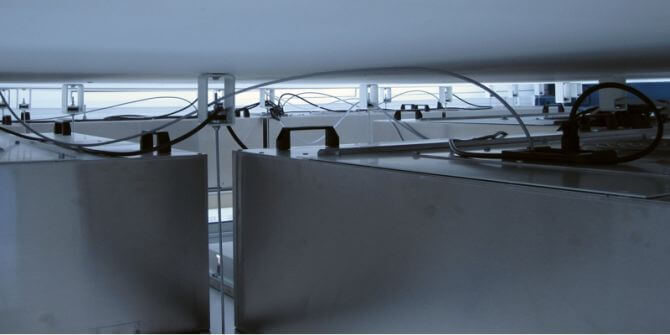 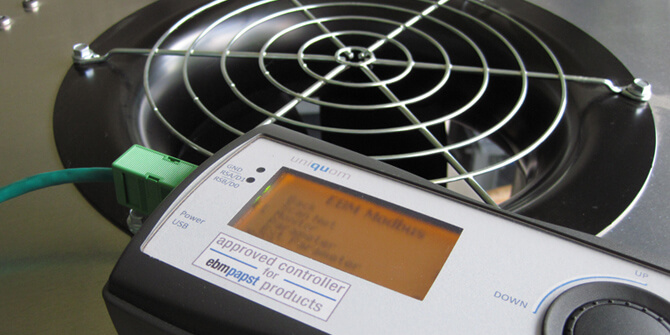 vbk technology would appreciate to answer your questions about EC fans or EC Motors. Feel free to contact us . We look forward to your message.

Why are ec fans more efficient?

In every electrical motor a radial magnetic field is required to interact with the motor current to generate a torque. In EC-motors permanent magnets are used for that purpose. Thus there is no additional current required what is effective, mainly in partial load range and leads to highest efficiencies in the whole operation range.

What are ec plug fans?

Fans with backward curved blades are normally higher efficient than those with forward curved blades. They are available either already mounted inside a special housing or delivered without to be plugged by costumer directly in his plant. This is where the name plug fan comes from.

EC-fans are designed for the use of a modern EC-Drive. Those are not only higher efficient than classical induction drives but due to it's electronic driver better in a wider range of voltage and frequency. Thus these products can be used normally worldwide without any modifications.

How to control ec motor?

EC-Motors require a matching drive controller compellingly that generates the supply voltage for the EC-Motor. Together they built the EC-drive. Start-Stopp sequences of the drive will be made very gentle what causes higher lifespan for the EC-motor. To the customer the application is very easy, either it is been speed controlled by an analogue 0-10V signal or nowadays by RS485 interface. The latter one can be very easy controlled by suitable control devices i.e. from our house .

The function of an EC-motor is quite simple as the switching from (winding) phase to phase is not made by a mechanical commutator but by the drive controller, that’s why it is called Electronic Commutated. The exact rotor position is normally been detected by tiny little hall sensors placed inside the motor.

What is a FFU / Fan Filter Unit?

Air Filtering Equipment with Fan, taking Air from the ceiling pressing it through the filter into the cleanroom, either as laminar or turbulent flow. Control of the FFU either by a FFU-Control Center or directly in closed loop manner for a required volume, pressure, speed or any other control value.

How a brushless DC-Motor works?

Brushless Motors or Brushless-DC-Motor is just a different term for EC-Motors. Controlled like an DC-Motor, they don’t have either carbon brushes or commutators, what leads to a very low level of wear. While the term "EC-Motors" has been used mainly by ebmpapst to promote their high efficient drives, i.e. NICOTRA Gebhardt calls theirs products "Brushless DC-Motors" officially.

For our customers we design different diagnostic and control devices for EC-drive market. This includes drive controllers incl. COM-interfaces (analogue, Modbus rtu as well as other, even proprietary, RS485 systems).

Furthermore we plan whole concepts for electric drives (asynchronous and synchronous) especially for fans as well as special applications.

We help our customer at the design, the data management and the project programming of FFU appliances. Furthermore we would like to support you while the commissioning of new cleanroom appliances or extensions and perform on demand an error diagnostic with our own designed tools (i.e. uniquom / uniqunet ) including a final troubleshooting.

Cleanrooms – Modernization of an ebmpapst Control

Following a recommendation by ebmpapst a big building automation company from Leipzig requested support for renewing a FFU control system of EC-FFUs, each with an ebmpast-drive, in Erfurt.

With pleasure we provided, besides to some advices, a handheld tool for the EX-Fans free of charge to check the operation of the system. As only the terminal-box has been changed to one with ebmBUS interface, it was not entirely clear if a surprise awaited the costumer.

Yesterday evening we received the enjoyable feedback, anything went perfect and that easy that they even had enough time to address the FFUs already correctly. So there are no technical reasons that speak against the usage of 3 EC-FFU Control devices.

By mid of March a US-American OEM-customer placed an order for controllers for their EC fans. Hand programming tools as well as EC Control devices for the fixed installation were ordered to use the ec fan advantages of their ec fan technology in cleanroom applications. 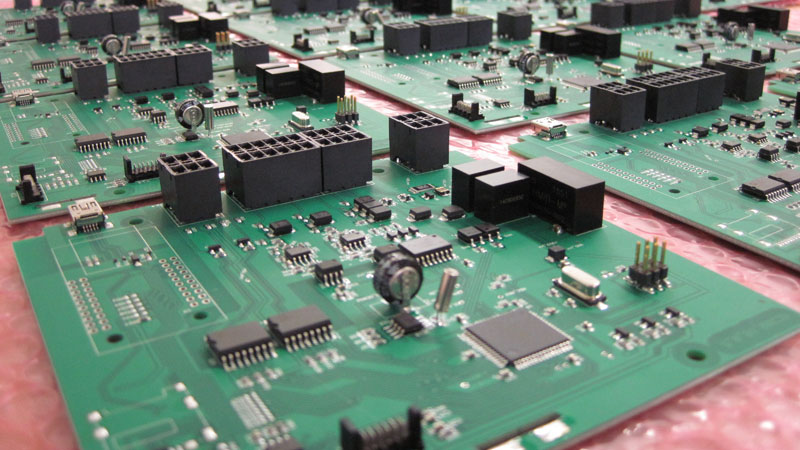 It is for us more than a matter of decency, even in difficult times, to match costumers’ wishes in terms of delivery date. Due to the outstanding commitment of our employees we achieved to create a time reserve the American duty know “to use”.

Last Tuesday we realized the final commissioning of an FFU-appliance at the Institute of Experimental Physics at Bielefeld University.

In total 13 FFUs of different sizes, equipped with EC fan technology, show up their advantages. They are separated to 4 groups controlled by 2 different EC-fan control devices from 2 different generations.


Handheld to control and parametrize EC-fans

One of the biggest energy suppliers in the western part of Switzerland is now using technologies out of the Vogtland to parametrize and control his EC-fans from ebmpapst.

The chosen parameter set for the service handheld does not only allow to control EC-Drives with Modbus - und ebmBUS-interface but to clone whole parameter sets within seconds from ec-fans of the same physical size.

Smoke Extract Fans, whether as Radial- or Axial fan, should keep emergency exits and paths free of smoke. Even if there is no normal air ventilation required, a save start and operation is demanded in case of fire to achieve the nominated run time for such a fan. A proper function of the motor bearings is there for indispensable.

The bearing monitor unit that was especially developed for a fan manufacturer evaluates different frequencies out of the swinging acceleration that needs to be measured. The evaluation is more or less independent from the type of fan, motor and bearing and it even detects pre-damages of the ball bearings from the induction motors. 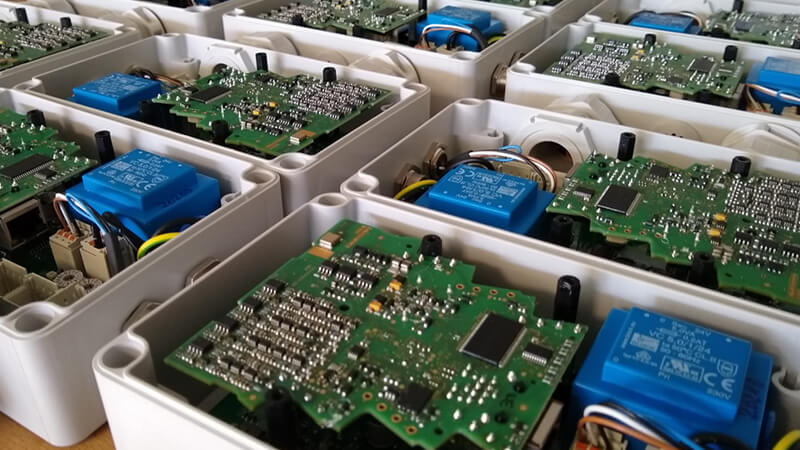 However a little more complex is the monitoring of the bearing conditions at EC-fans, because the measured frequencies overlap with the switching frequencies of the EC-Controllers.

The evaluation is quite easy as a simple traffic light control (green-yellow-red) at the device. A special software can be applied for detailed damage analysis.

A big research institution for Micro- and Nano-technologies in Nordrhein Westfalen enlarges their cleanroom capacity this summer. The additional cleanroom surface is covered by FFU's from NICOTRA||Gebhardt that are controlled and monitored by an existing FFU-control centre since last Tuesday.

The commissioning runs without any problem, besides to the correct addressing only some max-speeds needs to be set by hand, what is really no issue with our control devices for EC-fans.


Handheld to control and parametrize EC-fans

On of the leading HVAC distributors and contractors in Israel uses, by its own account, mainly EC-fans from ebmpapst and Ziehl Abegg for his appliances. 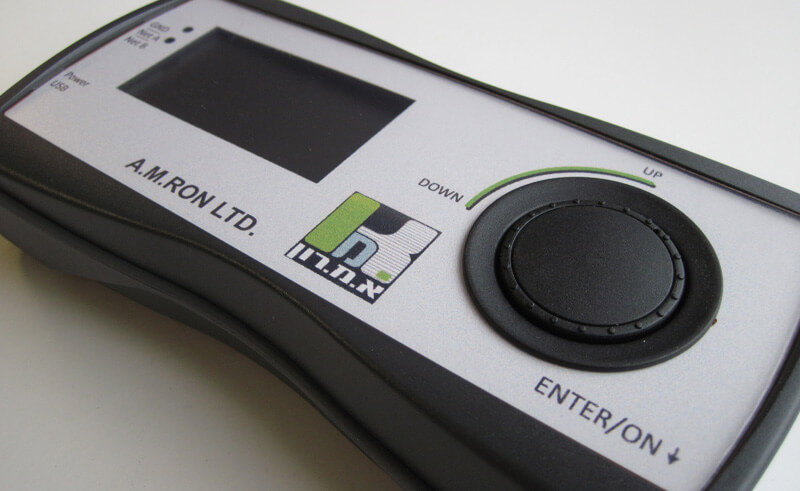 From now he will program and control it's EC-fans with Modbus- Interface by technologies out of the Vogtland. With that the handhelds of the unqiuom series will be used at 24 countries worldwide. 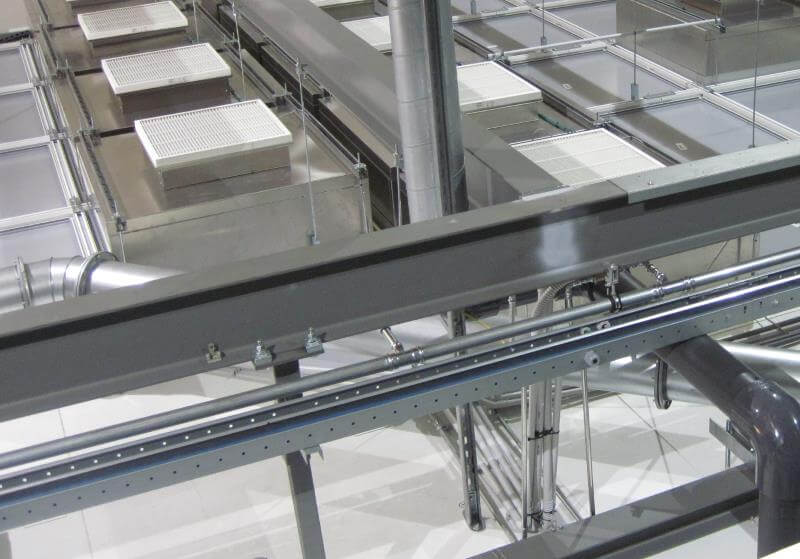 After a few years of absence the Cleanroom Lounges took place in Karlsruhe this year again. Personal highlight for me was the operation of a of an uniqunet control device driving an EC-fan of a NICOTRA Gebhardt ( former Gebhardt Ventilatoren ) FFU.

NICOTRA Gebhardt has been an OEM costumer for our control devices for years. 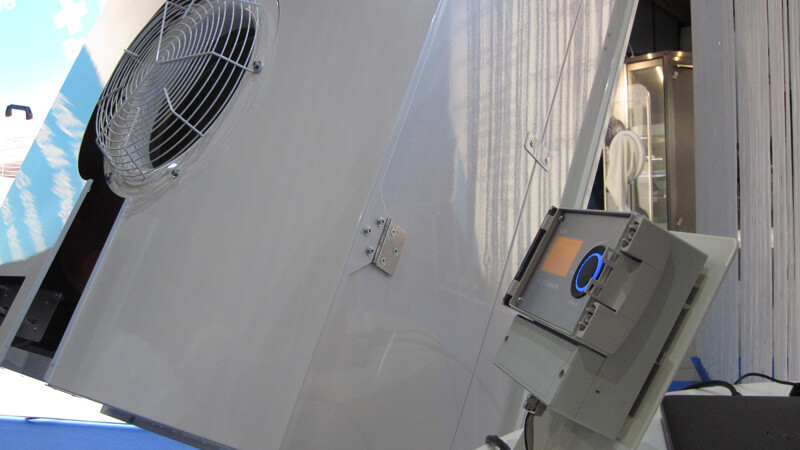 A well-known research institute in Munich had scheduled a filter change of their FFU's for the last week. Here, the opportunity was taken to check some communication abnormalities in the control of the FFU's by a FFU-Control-Centre type FanCopmmander200). The installation was commissioned with components from NICOTRA Gebhardt in 2005.

All involved have been delighted as it has been find out that neither the EC-FFUs nor the FanCommander200 has caused the problem but just a simple hidden cable damage in the main backbone. After renewing it, the installation is running perfectly again and that after this long run time.

A modern hand device to control and to parametrize several devices with RS485 interfaces.

Stand-alone Monitoring and Control device for different applications with RS 485-based interfaces.